Staff had an ‘Elfing’ good time raising money for charity

Hundreds of pounds have been raised for an Alzheimer’s charity by our staff, who had fun ‘elfing’ about last week on one of our dementia inpatient wards.

Staff working on Tower Ward at the Landermere Centre, Clacton, took part in the Alzheimer’s Society’s festive fundraiser on Friday 2 December and raised more than £300. 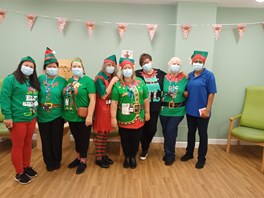 They came to work dressed as an elf and made elf bunting and paper chains with the patients.

Throughout the fun-packed day, staff and patients played games such as ‘guess the number of elf shoes’, in which the lucky winner won a hamper that was donated by staff. They also took part in a lucky draw.

The ward also had its very own Elf on the Shelf, who made sure things ran smoothly and ensured there was lots of fun and laughter for the patients and their visitors. 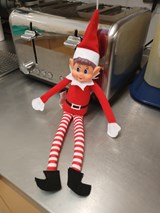 Ward manager Annette Knott said: “This is the second time we have taken part in the Alzheimer’s Society fun day and we had a fabulous day, although some naughty elves were awarded the Scrooge Pass for forgetting to join the elf experience.

“The team at Tower Ward all recognise who difficult it is caring for someone living with dementia and the Alzheimer’s Society plays a great role in ensuring that everyone involved is supported. We often signpost relatives and carers to them for their own support.

“We were really pleased to have raised more than £300 for the charity through our games and activities as well as our JustGiving page. Both our staff and patients had a really nice festive fun day.”

If you would like to support Team Tower raise even more money for the Alzheimer’s Society please visit the JustGiving page here.